Burning Your Heart Away 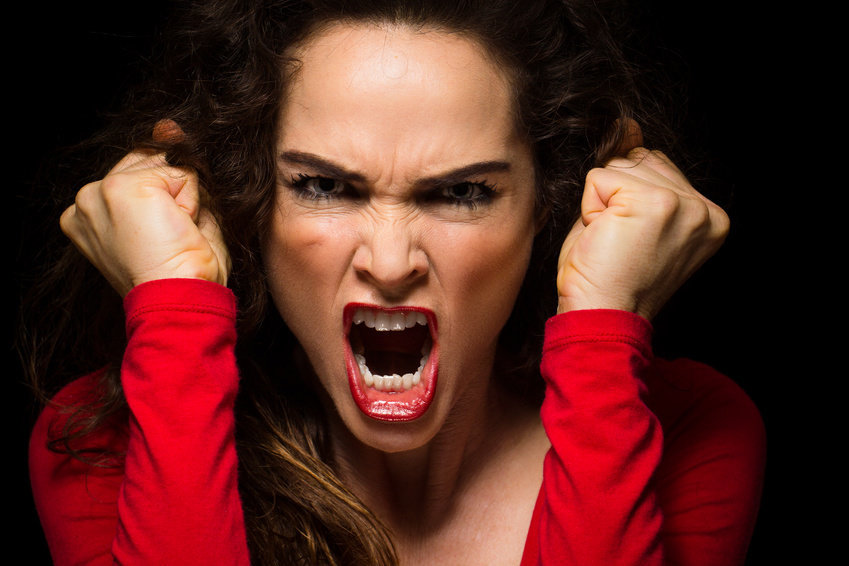 Burning Your Heart Away

There are several basic emotions that most people would have – happiness, sadness, anger, contempt, surprise, fear and disgust. Among all these emotions, anger gives the greatest impact in our lives. For instance, good friends can spoil their relationships due to as simple as some misunderstanding that would transform into anger. A couple could break up due to as simple as some words used when they quarrel while being angry at each other. In addition, two people may accidentally be killed due to uncontrollable anger. In terms of health, continuous anger contributes to stress, hypertension, stroke, reduction in the immune system and even may lead to depression.  From these examples, we can identify the impact of anger in our daily lives.

Ibrahim was a school teacher. Each morning, he would go to the nearest restaurant to pack breakfast for his children before leaving for work. As usual, he went to the same restaurant. One day, he noticed there was a tall and a stocky gentleman who was walking towards him after he had packed his breakfast.  “Bump…” The stocky gentlemen bumped into Ibrahim and his spectacles fell down and broke.  Due to the high impact of the collision, Ibrahim’s eyes got injured with some blue-black. The stocky gentlemen not only did not apologise, he also shouted, “Who asked you to wear spectacles!”

Ibrahim stayed cool and started to contemplate. He understood that everything happened for a reason. It might be good, it might be bad. His wisdom reminded him that to overcome the bad encounter, he needed to accept the scenario happily. Hence, Ibrahim replied the men with a smile, “I am so sorry, I hope I didn’t hurt you”.

The man was shocked. In his inner heart he whispers, “Is this person okay? He was supposed to be angry and scold me. Why does he want to apologise and ask how am I? I totally cannot understand his behaviour.”  Immediately, he asked, “Hey, why are you not angry with me? But…”

Ibrahim replied, “Why shall I be angry? Showing my anger towards you would not be able to reserve the whole process. I would not be able to get back my spectacles. The blue-black on my eyes would not disappear.  Moreover, anger would only make the whole scenario worse. Think about it, if I were to scold you and blame you for your action, it would create a bad relationship between us”.

“There are so many people that we encounter with each day. The whole accident happened exactly at a particular time and place. It was the faith that linked the two of us together. Instead of getting angry, I need to thank you for giving me this chance for the creator to test myself”.

The stocky guy was impressed and they started to get to know one another and became friends. One day, Ibrahim received a letter without a stamp in his letter-box. When he opened the letter, he was shocked, there is RM500 inside the envelope. The letter was sent by the stocky guy whom Ibrahim encountered that day. The content of the letter is as follows: 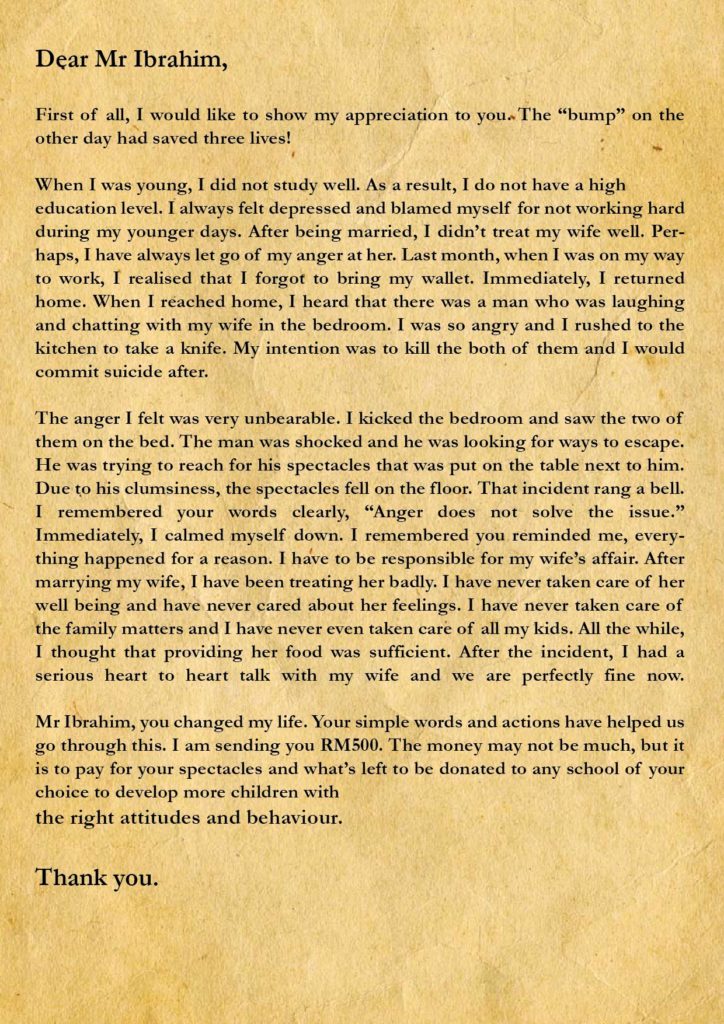 Now I finally understood that we cannot avoid conflicts especially during human interactions. The conflicts encountered could be physical or emotional. Mr Ibrahim’s small gesture to stay calm rather than retaliate or show his anger has changed a person’s life. In reality, anger is just a method to punish ourselves. Please think, why do we need to punish ourselves for the faults of others? Stop punishing yourself and say NO to anger today!